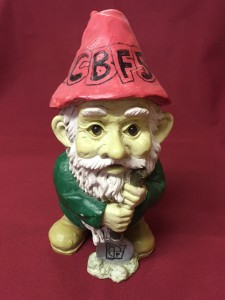 This little chap turned up at our event on New Year’s Day and Judy is convinced it reminds her of someone! 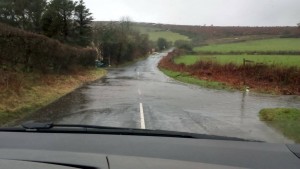 But what a day!  For the third consecutive year we must have upset the weather gods for yet again it rained almost continually for the whole day.  The photo right was taken by Graham as once again he negotiated flooded roads to get to us.  Amazingly almost every single person who said they would attend did so. 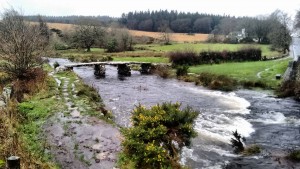 As would be expected in such conditions the rain caused our Dartmoor rivers to be in spate and this photo by Mike Norton shows the East Dart at the famous Clapper Bridge, a couple of hundred yards from the hotel where we were holding the event. 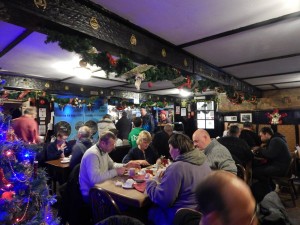 From the 42 Will Attend logs we thought we may get about 80 people, but it would appear that we probably had over 90 (including our helpers)! What an amazing turnout.  So, many, many thanks to everybody who braved the Dartmoor weather to get to Postbridge.  Last year we struggled to serve 60 cream teas, but fortunately we had extra help this year and did manage to serve about 80 cream teas.

However, the most amazing aspect of the day was the unbelievable generosity of all those who attended.  As you know I had set targets of raising £350 for the Devon Air Ambulance and £100 for the 2017 Devon Mega Event.  Well, we blew them out of the water!  Last year we raised a total of £337 – this year it was £553!!

The cream teas raised £233 and thanks once again to Caroline for selling the tickets, to all those who brought such a wonderful display of prizes and to everybody for buying the tickets – the raffle raised £225!

However, we were not finished.  We then moved into Auction mode and after three preliminary auctions which raised £25, the highlight of the afternoon was a Blind Auction for an unknown box of caching goodies donated by our very kind and popular reviewer, Heather.  We had agreed a reserve which I thought we may struggle to reach, but after starting it at £10 I was amazed to see it go up in £5 bids.  I thought it had been sold at £50, but no, Andy had bid £55, but he was beaten by Bob who was clearly determined to win it for his wife Corinna.

I had already announced that all proceeds from the raffle would go to the DAAT together with two thirds of the cream tea money.  The auctions were split according to the wishes of those donating the prizes and there was another donation of £10.  The result is that the Devon Air Ambulance will receive £430 and the 2017 Devon Mega £123.

My last task is once again to thank everybody.  Thanks for coming, thanks for being so generous in bringing raffle prizes, buying tickets and bidding in the auctions, thanks to my partner Judy, my sister Pat and her friend Ruth, to Sue (behind the bar) and her husband Mike (who did all the washing up) and to the Paul and Rosie landlords of the East Dart Hotel for allowing us to use the hotel whilst they were away on holiday – totally free of charge.  In fact, once again there were no deductions and every penny taken (except over the bar) is included in those total amounts to be donated.