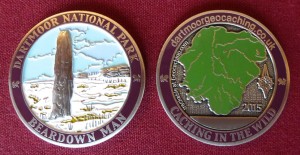 A late journey to New York from New Zealand made Christine an easy winner in this year’s Dartmoor Geocoin Race.  The trip of nearly 9,000 miles took Christine’s coin from 3rd place to first for an easy win by nearly 7,00 miles.

Unfortunately the previous leader’s coin, owned by Justine, has not been seen since 25th September and has now been marked as missing,

Considering that Kevin’s and Sue’s coin didn’t even get placed until August, it is amazing they they managed to finish third with Tammie’s coin fourth.  The top 4 coins have a total mileage of over 63,000 miles and visited places all over the world, including two going to New Zealand and one to Hawaii.  Trips to Europe and America by the race participants were almost common place, with almost all the coins reaching foreign countries at some stage.

What is really amazing is that out of 27 coins which started the race, it appears that 20 of them are still being moved around, which is excellent considering the quality of these coins and all the bad news stories that are always being circulated regarding trackables.  Two of these 20 coins did reappear after it was thought likely that they had been lost, so you should never give up hoping.

I did say that I would offer 4 prizes if we received 30 entries, and it is no fault of those participating that some coins never got activated or placed.  I will therefore honour that and award 2016 Dartmoor Geocoins to the first 4 in the race.

So that’s all for the 2015 race, we will start the 2016 one some time in the new year and hope for the same great support that we had this year.  Many thanks indeed!