Having many remote caches, is something of a double edged sword when it comes to maintenance.  Generally, caches that only get visited 10 to 20 times a year seldom go missing and provided that cachers are careful when logging them, they should require little maintenance.  A maintenance visit once every 2 years should suffice unless there are reported problems.  Having just adopted several caches from ELDitton I knew I ought to start checking on them, and today was that day. 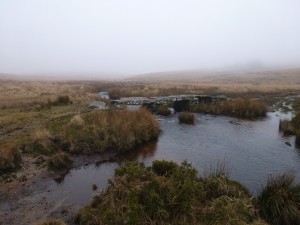 Because much of my walk would be in the Okehampton range I had to pick a day when there was no firing and at this time of the year that means a Monday, whatever the weather!  Fortunately today was forecast as misty but dry with temperatures close to freezing most of the day.  To access this part of the moor it is best to park at Fernworthy, but not in the car park but at the very end of the road.  A good forest track then takes you right into the moor near Teignhead Farm.  As I overlooked the moor visibility wasn’t great, but it was very atmospheric – just how I love Dartmoor to be!  The first thing you come to is a fantastic clapper bridge, in my opinion one of the best on Dartmoor, but it only gets one thousandth of the visitors of Postbridge. 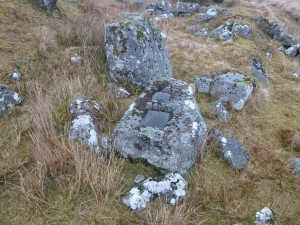 Following the Teign upstream I soon came to the first adopted cache, Blacksmith’s Shop. I haven’t found this for several years and needed the very explicit spoiler photo.  The cache container was a mess and full of damp rubbish.  The log inside its film box was dry, but totally full, so I replaced the whole cache with a new clip lock box. The Blacksmith’s Shop is recorded as a Blowing Mill and has a fine example of a Tinner’s Mould Stone, see photo.

I followed the Teign upstream a little further and then headed cross-country for my cache Fernworthy Forest View – not that there would be any view today.  I came across this spot a couple of years ago but only had a micro with me, so placed that.  Of course I couldn’t find the micro, but on checking some earlier logs saw that it had been moved, not far, but far enough.  I placed the micro in another small clip lock box and hid it under a stone.  Next stop was the adopted cache at Quintin’s Man, but everything was good there. Since I have lived on Dartmoor I have visited the heads of many of the great rivers, and I had three lined up for today.  The first was Teign Head which was a real disappointment given the great river it becomes.  Maybe we need some more rain!

Next, I needed to pick up the East Dart as I have two caches here, one of which hasn’t been found since October 2013.  This cache was placed in June 2011 and I have only visited it once since.  I couldn’t immediately spot it, so resorted to the usual “now where would I hide it”. Obviously I had a slight advantage here and the cache was soon found, once again in excellent condition.  I have now added a spoiler photo!  I actually had more difficulty in finding my next cache, but eventually did so and once again all was in order. If Teign Head was a disappointment East Dart Head was just the opposite and the finest river head I have seen on Dartmoor.  Although almost no water present, it was clear where the river had cut huge winding channels through the peat, some of which had then collapsed.  Above that was a dainty little stream – the East Dart as you have never seen it! 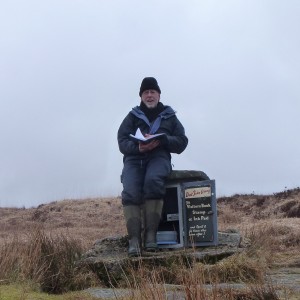 Being so close to the Cranmere pool Letterbox it is impossible not to visit once again, my second visit in a few weeks!  I didn’t need to check on my adopted cache here as I had done so on my last visit.  This time I couldn’t resist signing the logbook once again and even managed a selfie with me sitting on the letterbox

The area between East Dart Head and Taw Head is of course, a watershed, but not a sharp ridge but a very flat and boggy area.  Fortunately I had chosen my trusted Muck Boots for today’s trek, a decision I was thankful for many times over.  Taw Head was my third new head of the day and although again with little water it does have a nice winding valley which would probably look good with a good flow of water. 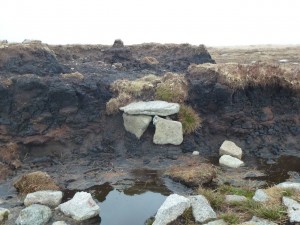 I next headed up to check on my caches at Hangingstone Hill and Whitehorse Hill. Neither were a problem to find and both were in excellent condition.  The Whitehorse Hill cist is a bronze age burial site and well worth the visit, although I was disappointed to see that the cairn behind it has totally disappeared.  I then had to check on my adopted cache at the south end of the peat pass as I knew from the logs that this had problems.  Once again a damaged outer container but this time an inner micro with a sodden logbook.  So, another new cache was required here.  By this time I was a little behind schedule and headed for the most direct route back to Fernworthy.  This was a mistake as I followed the Manga Brook for its whole length resulting in a continous paddle for nearly a kilometre! Next time I will keep to my normal route of Manga Hill.  By the time I got back to the forest it was almost dark, but I didn’t need my torch.  In all my total route was just on 11 miles, almost none of it on paths, except that through Fernworthy.  However a great day and much useful maintenance completed and caches checked.