Please note that you can click on any of the photos to see them enlarged. 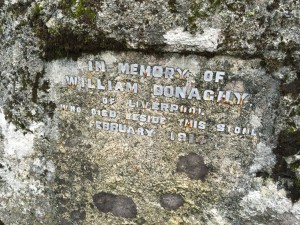 The Dart’moor’s Double Dozen series is placed around the East Dart from Postbridge to the East Dart waterfall and back.  Although almost all the caches are intact there were questions marks over several others around the route – so time for some more maintenance!  But the first objective was the recent Finder-Man cache near the William Donaghy Memorial stone – not too difficult despite the gorse 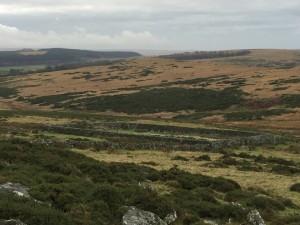 For me, the most impressive structure on Dartmoor is shown on the map as The Sheepfold, although clearly it’s high walls indicate that that was not it’s original purpose.  Evidently it was built as a Starch Factory by John and Thomas Hullett at the start of the 19th century but seems to have been another ill-conceived Dartmoor business which soon failed.  I was brought back to this area to check on The Starch Factory cache which had indeed gone missing and is now replaced. 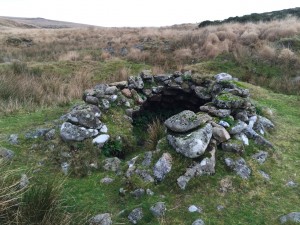 Not far from the Sheepfold is the Beehive Hut, another very impressive Dartmoor structure.  Beehive huts such as this one were used by tinners and stone cutters to store their tools and also as a small shelter from the elements.  My adopted cache, Beehive Hut, has caused many problems and once again it had appeared to go missing when a found log was recorded.  For some reason the cache had disappeared from its proper hiding place and had been found on the open moor a few yards away.  Fortunately I quickly spotted this and returned it once more to its rightful place. 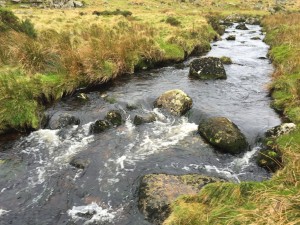 My main concern for the day was the state of the streams and rivers.  The normally innocuous little stream that runs near the Beehive Hut and feeds the East Dart looked far too difficult to cross at that point so I followed it down to the stepping stones and managed to cross there.  However, the next cache to be checked was the one on the East Dart Island and there I decided that the East Dart was far too dangerous to be crossed at that point, so unfortunately I was not able to check this cache out.  This cache has never gone missing and I very much doubt if it has gone missing now 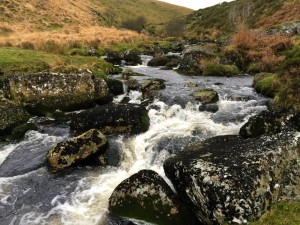 Three more caches were checked on my way to the East Dart Waterfall, and despite several DNFs on two of them, all three were exactly where they should have been.  Having seen the state of the East Dart I was getting extremely worried as to whether I would be able to cross it safely at the waterfall.  If I couldn’t not only would it mean a longer walk back, but I wouldn’t be unable to check the caches on the other side of the river.  This was the river near the Dart’moor’s Double Dozen 12 cache!

It wasn’t immediately obvious whether it would be safe or not to cross the East Dart at the waterfall, but it was certainly going to be challenging!

From a distance the challenge didn’t look too bad, but it was a lot more worrying the closer you got

I have to say that this was the most difficult crossing I’ve had at the waterfall.  The water levels were high, the river running very fast, the rocks were wet and very slippery.  I was very aware that one false step could see me swept over the edge, so I proceeded very cautiously – much of the time keeping a three point contact with whatever I could reach!

Well, I made it to the other side and was very relieved to have done so.  My adopted cache, Near the Waterfall, had gone, so was replaced.  Never Say Never 6 had also gone, so another replacement.  I made my way back down to the East Dart as I knew that DDD17 had gone, so once again a replacement!

In total my maintenance walk was just under 7 miles. I found one new cache, visited 14 of my caches, of which 4 were replaced, 3 received new logs, 1 was moved and the other 6 required no action at all.  All in all another great day on Dartmoor