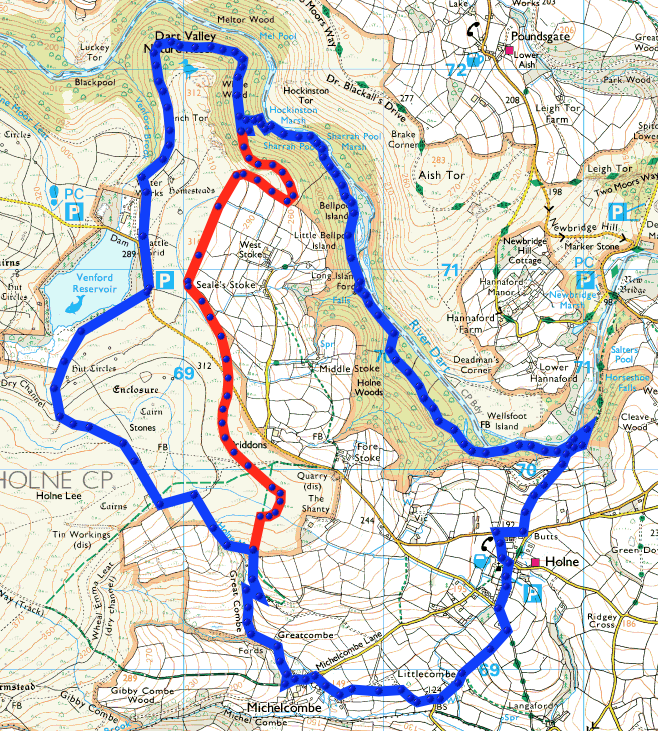 Name: Holne Hike
No. of Caches: 39 on main blue route, plus 11 on red link route (includes 4 caches on route by same CO).
Length: 7 miles  on main blue route, the red link route is under 2 miles.
Owner: Dartmoor Dave
Cache Types: A wide variety of good quality caches most of which are large enough to hold swag and trackables and are reasonably easy to find with hints where appropriate.  There are also several novelty type caches.
Bonus Caches: 3 bonus cache within the series.  Only 12 bonus  numbers need to be collected, all of which are repeated in a second cache.
Terrain: There are very good paths on much of the route, but not between HH08 and Sharrah Pool or between HH26 and HH29.  These both have difficult paths and steep descents, rated as terrain 4.  The terrain is varied with woods, streams, open moorland and many splendid views.
Parking: Large car park east of Venford Reservoir at the starting point of the blue route.
Description:  Originally this was 3 separate series which criss-crossed and were confusing.  Now consolidated into a single series with 11 linking caches to provide different route options.  This series is  described as a family friendly series “who like a bit of excitement!”  Although the vast majority of the paths are easy enough, the stretches between HH09 and Sharrah Pool and between HH27 and HH28 are rated as Terrain 4.  There are some very steep sections with a sharp drop adjacent and these are NOT suitable for young children and it is recommended that ALL children are supervised.  However, the linking route does allow alternatives should these prove too difficult.  Allow ALL DAY to complete the main Holne Hike blue route.


FPW - I’ve used the Wilson Score Interval method to rate caches by favourite points. This is far better than a simple count or average as it takes into account the total number of finds. It does not include logs from basic members.